just thought this was funny 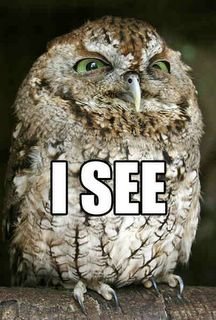 "Seems like it always seems, where I go I want to leave"

that's a line from the Matt Pond PA song Halloween. i thought it was a interesting way of describing how i feel sometimes (fairly often?). i tell you, i'm not feelin' it today. i feel tired and rather down. i know why i'm tired, but not exactly why i'm down. i think it's the same old thing. i dont have enough time in the day to relax and accomplish the things i want and need to accomplish. am i the only one who has the monthly reoccuring thought of "is this what i'm supposed to be doing with my life"? i hope not.

dang. and our gig posters havent come in and it's been almost 2 weeks. i'm beginning to think they may have gotten lost. 2 out of the 3 were the last ones they had. man, this isn't making it any better.

okay, jess and i went to Memphis this past weekend. in your mind you think "well that's in TN so, i mean, it cant be that far away, right?" wrong, in reality it's only 35 miles closer than Atlanta. good night. anywho, it was a fun trip. like a tiny vacation. and it was cool to see the school it seems like scott's been going to for 5 yrs (in reality, of course, it's only his 2nd year). and i hadn't been to Memphis in a while. it's nicer than i remember. and the weather was just fantastic. and scott lives in a frat house, but it's really cool. he has the 3rd floor all to himself... 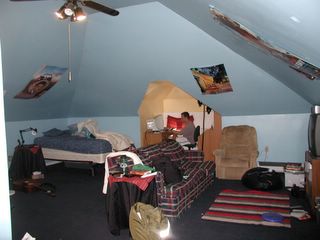 ...which isn't necessarily good for his bursitis. but he makes it look easy (and i totally think he's faking it). 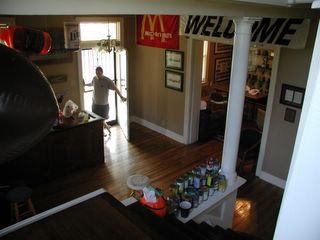 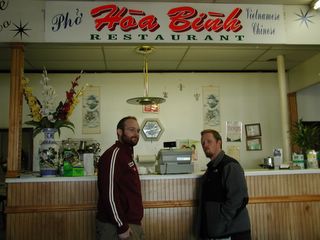 look who's squintin' now. is it the guy with the blue blockers? i dont think so. 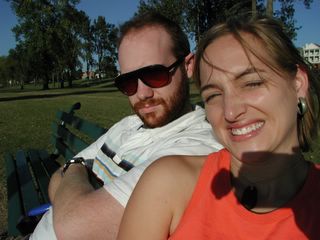 i think scott has about 3 cubic feet of freezer space lost to ice. 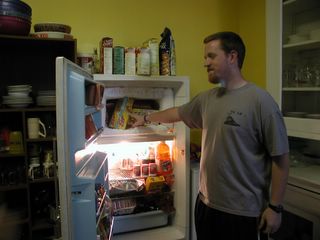 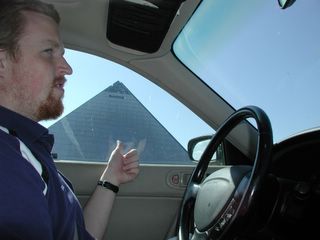 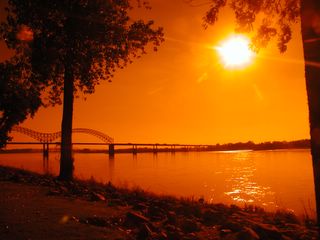 anywho, it was fun. but this weekend is the Octoberween party! it should be fun.

perhaps The Flying Saucer tonight? i dont know.
Posted by Josh at 11:14:00 AM 3 comments

this was the coolest musical performance i've ever been to (and paid for). i got these guys' CD back in June or so and have just thoroughly enjoyed their music ever since, so i was tremendously excited to see Nashville on their tour schedule. so i made sure to jesse plenty ahead of time (because she needs to know things like that) and that we wouldnt have anything else that friday. (i even made up a flyer with direction for her. she likes things like that.) well, it turned out my office as providing pizza and beer earlier that afternoon, but that only sweetened the friday deal. anyway, we got down there way ahead of time and sat around looking for garage sales in the paper (in which one we actually got our new dining room table; it's sweet). as soon as we walked in the place we realized what this was going to be like: close. you couldnt have fit more than 100 people in there, the stage was 6" off the ground, and you could stand close enough to the stage to... well, it was really close. but i just enjoyed it so much. until i went to Sufjan Stevens, i had never really been to a concert starring a band i really really liked. like we went to some back in high school, but i was mostly just going to go with the group. honestly, my ears are pretty sensitive to highs, so unless it's music i just love, i'd rather just sit in the back or listen to the cd. but i've come to realize why people actually enjoy concerts... because you get to hear the music you love played really loudly. but on top of that! if you can watch it up close it's WAY better. it's so cool to put a face to music. it totally changes the way you listen and see the music. when you see that an actual person plays and sings this music (and well), it's like opening your eyes when watching tv (i guess that's a pretty literal metaphor. ah who cares. it makes sense. maybe it wouldnt even be considered a metaphor. whatever.) 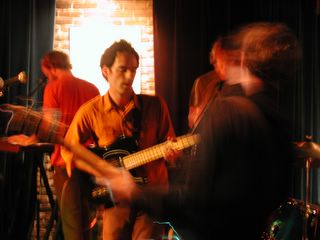 so after we were done rockin' (and it really was an awesome performance) i went around (after a bit of encouragement from jesse (you always think you'll be so calm and cool approaching someone in this nature, but i was a bit nervous. i have a natural fear people wanting to leave while i'm talking to them or something like that, and when you know that the person might be needing to do something else it makes it even worse. so i was sort of nervous)(uh, where was i?)(oh right) to get each of the band member's autographs on my cd cover. they were really nice and very happy to do it. and the coolest part was when i was getting the last guy's autograph (Lee) i was telling him how this was all i had left from my cd after it had gotten stolen in Costa Rica and he was like, "seriously? it was stolen?" and i said "yeah, from my rental car". so he said " well hang on a sec. let me see if i can get you another one." sweet!! and he did. it was awesome. i also got some posters and stuff (including a gig poster for $10 which i wouldve kicked myself big time had i not gotten it to accompany us in our abode)

man, i would've loved to have talked to them longer, but again, we get back to that wierd fear. i mean, honestly, i didnt know if they needed to put their stuff up and get on the road or what. plus jesse didnt feel so hot (and my stomach hurt too (but i wouldve stayed till they closed or cyhsy left)(but i'm very thankful jesse came to share in the occasion with me. she knew how excited i was and i appreciated her attendence very much)). but in the end i suppose they are just people and it is just music, so, not the end of the world. i just feel so lucky to have gotten to experience such an incredible band in such an intimate atmosphere and of course, to have had jess by my side. i really think that it was a bit of a once in a lifetime opportunity. i dont think i'll ever see them in that small of a concert again. i'm glad we were there.

in conclusion, ticketmaster sucks big time. i'm sorry, but $8 is not a very convenient fee. i can drive to Cookeville for $8. what kind of convenience are we paying $8 for?! (luckily, we didnt have to use ticketmaster for this)

this girl also went to the concert. her pictures are a bit better, but she was right in front of the band (as you can see). i think that would be a bit awkward at times. who knows. she's also a radio dj for WRVU, so her description of the event is a bit more professional; much fewer "( )".

so i've really been into gig posters as of late. i've always thought they were neat, but recently i've just really been excited about getting some and putting them up. the only downsound to collecting them is that they're a bit expensive. but perhaps they're not. when you think of them in terms of "art" rather than "posters", i suppose $20 isn't that bad. and some of them just look so cool. and for a lot of them, they'll only make around 50 or so prints. so we got 3 (for now)... 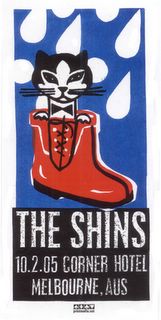 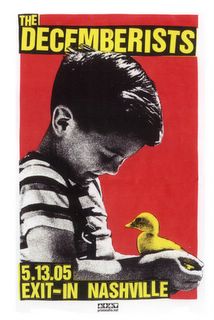 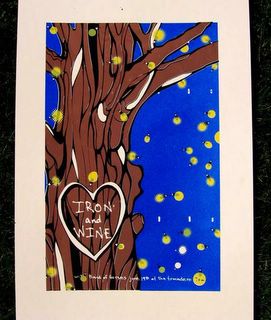 we felt that they nicely represented both our musical tastes and our style. there were many many more that i would've loved to have gotten, but alas $70 will do for now.

and tonight! we're going to see Clap Your Hands Say Yeah! i'm so excited. i hope it works out and we get in. it's a really small place and there were no advance tickets so i'm sort of worried. but i think we'll get over to it in plenty of time to get in. i hope they're cool. i hate hearing awesome music only to find out that the band members dont represent things i value or do represent things i find offensive. that's so tough for me because i REALLY like music. like, i was telling jesse the other day, i'd rather not know anything about a band's religious belief's or lack there of than find out that they not only dont believe in God, but also make light of Him. does that make sense? for example, the new Wolf Parade CD. it's an incredible CD. just really great. but in one song they use God's name in vain in a way i found particularly displeasing. and that was all. no more mentions of it or anything. but that one little thing just really bugs me and wont stop. and i know it's not there job to please whoever and i'm not making any judgements or anything, it's just rubs me the wrong way when i hear stuff like that. like it was really cool to see Sufjan Stevens and enjoy the music and come away with the feeling that the band members are great people. anyway, i just hope CYHSY is cool.
Posted by Josh at 10:27:00 AM 2 comments