for some weird reason...

...days seem to last a lot longer when you get up at 5am. go figure.

i took these on my way into work. i like the different focuses a lot. and while taking these pictures was fun, just remember: ALWAYS... no... NEVER attempt this is heavy traffic. 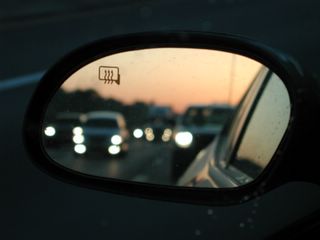 (well, this one was taken once i GOT to work. obviously.) 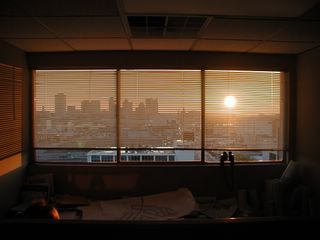 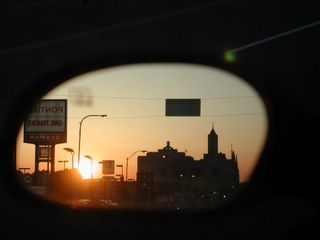 i'm always amazed at just how fast the earth actually rotates. i mean, you can't tell during the day but at sunrise and sunset you can really see it moving.
Posted by Josh at 9:03:00 AM 4 comments

now, is that a good lookin' dinner or what?! 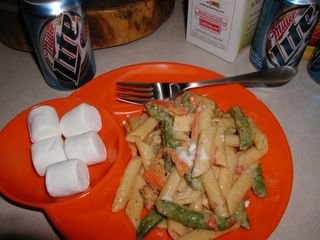 well, it's official: the Fiery Furnaces are my friend!

huh. so i signed on to Myspace (i know, could i be more of a follower? (absolutely)) and my first friend(s) are the Fiery Furnaces. i went through today and found all the bands i love and "added" them as friends. so we'll see how many truly value my friendship... as an online entity.

and yes, corey, your's doesn't look bad, but oh so many do. oh so many.

it's so hard to decide what picture says: I'm original, a little artsy, and quite a bit humorous, but the good kind of humorous; the kind you want to have at your parties because it's a subtle witty humor, not an in-your-face, look at me, i try too hard humor. originally, i considered: 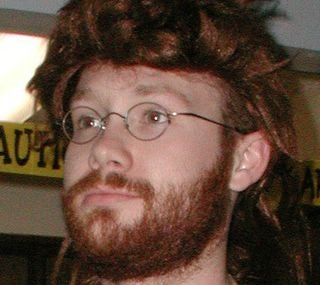 needless to say, there were some reservations with this choice.
Posted by Josh at 12:11:00 PM 11 comments 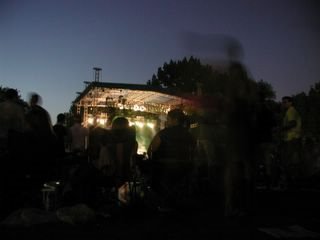 "Should participants stand on the coolers or chairs, they will be asked to sit down. If they do not comply, they will be removed from the event."

i thought this was sort of a stupid rule they put out there for the Rites of Spring festival. i mean, i was like, "who stands on a cooler?" but, i was wrong. dead wrong. there couldnt have been more people standing on coolers. i was only able to capture one on film though. stupid vanderbilt-ians. 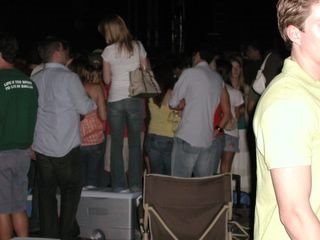 the event in general was pretty fun. although, we were quite late to it and ended up missing Bone Thugs (which was the whole reason jess wanted to go on Saturday) and came in about midway through Matt Pond PA. it was less like a concert and more like a college social event. about this, i was none too impressed. also, tickets were $25/day, $40/weekend pass, however vanderbilt students got in the whole thing for $10. double dang.

and while there's no cooler involved here, i can't imagine this is within the "no standing on chairs or coolers" regulations. thank you kind, woman. 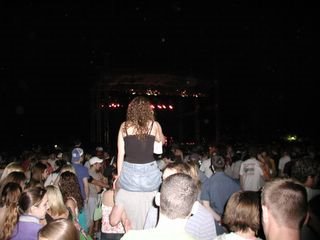 but Ben Folds rocked. it was lot of fun watching him play piano. i didn't know that his actual name was Benjamin Scott Folds. i just figured it was some variation of "Ben" and/or "Folds." i got a cool sticker that's black and just says "FOLDS" in white letters on it. it's pretty sweet.

man we were lazy this weekend. seriously. i hate it when i'm really lazy all weekend and then by sunday afternoon i've just had it with my unproductiveness so much that i stay up late trying to accomplish anything i can, therefore creating a long monday, like today.

and what's the deal with Myspace? geez. you'd think somebody just invented a better way to slice bread! and the layouts! holy crap, they're so horrible looking. i mean, truly bad web design on whoever's part. i just dont get it. am i missing something?
Posted by Josh at 11:36:00 AM 7 comments 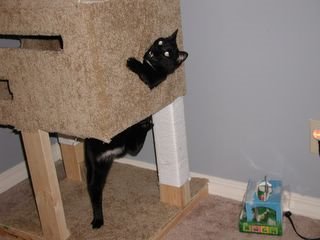 welcome to the terrordome 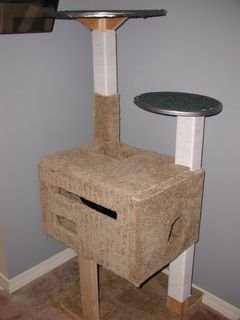 this is Dudley's Cat Terror Tower we just finished this weekend. i'm really quite proud of it actually. it came out exactly how i drew it. my dad helped with the construction and jess helped with the carpeting (which is really not that fun at all). but all in all, i think it looks pretty dang good. and it only cost me $30 (plus time, i suppose).

hopefully, Dudley can have some friends over to play soon. 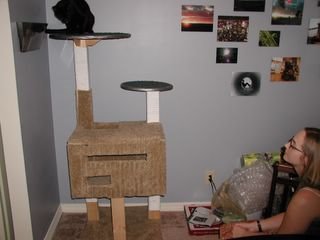 My New Toy... that is so way less important than Jesse it's not even funny. 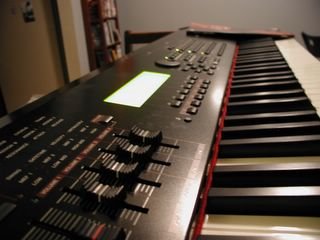 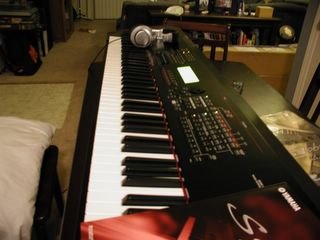 Stupid Babies Need the Most Attention

I haven’t been this excited on a Monday since I got married. I bought a keyboard this weekend and it will be delivered to me on Tuesday or Wednesday of this week. I am so excited; “teeming” if you will. In a way, I’ve been looking forward to this for the past 7 years or so (ever since I took piano lessons in high school). And what a process this was. I’ve learned quite a bit about myself over the past month (and how to handle things of this nature in the future). I was given a keyboard by my parents for my birthday a month ago and it’s been an interesting “journey” of sorts. I started with a $650 gift and ended up with a $1700 investment. Now, I realize that may sound insane at first, but if you did the research I did and had the same appreciation for quality in an instrument, you probably wouldn’t immediately crap your pants. It’s a Yamaha s90es and it’s best blend of synthesizer and actual piano on the market today. It has 640 voices, 65 drum kits, and an amazing piano sound. It’s a full 88 with weighted keys and hammer effect (so it feels very much like a piano).

I could talk about it for a while (and probably will once I get it), but I’m mostly writing to document this last… month. It’s been stressful. And I wish I could blame it on anything or anyone other than me, but I don’t think I can. I’ve always known that I obsess over things past the point of being healthy, but it wasn’t till now that I realized how bad it was. I guess a couple weeks back I was at church and the whole time all I could think about was the keyboard or some factor involved with said keyboard. After that I realized that I was actually worshipping this tangible thing and that my priorities were way off from where they should’ve been. And it sounds really bad like I was bowing down to this keyboard or something. Obviously, that wasn’t the case, but because of my attitude and where I allowed my mind to wander, it was pretty much worship. So, that was really uncomfortable to learn.

Then, the next week, I almost lost $1200 from a scam on eBay. This really hurt my confidence in myself and others. I felt so stupid and embarrassed by the fact that I pretty much fell for this guy’s scam. It went as follows: I had bid on this keyboard and lost by one bid, then, a week later, I got an email from eBay about a 2nd chance offer (which I had never seen nor heard about before). Well, to make a long story short, because of my excitement at this possibility, I didn’t notice many things that should’ve been bright red warning flags on a normal day. And if it weren’t for one of my friends at work, I would definitely feel considerably more stupid than I do today.

eBay Lesson For the Day: if a questionable "eBay message" doesn’t appear in your “My Messages” folder in the “My ebay” section, it’s bogus; plain and simple.

So here I am now, tired and a bit shaken from this whole thing. In fact, I’m afraid to even let myself get excited until it’s in my hands and I’ve checked it out. Anywho, that’s not a very hopeful note to end this on, so how about this… it’s a verse a guy sent a scammer who tried to rip him off. I really like it.

Woe to you who lie awake at night, plotting wickedness; you rise at dawn to carry out your schemes; because you can, you do. You want a certain piece of land or someone else's house (though it is all he has); you take it by fraud and threats and violence. But the Lord God says, "I will reward your evil with evil; nothing can stop me; never again will you be proud and haughty after I am through with you."

How’s that for righteous indignation?

Actually, here are TWO positive notes to end on:

1.) God watches over us; even when we act stupidly and put Him on the backburner. (Even though I was mis-prioritizing, I was still praying about the decision fairly often.)

2.) I have the most awesome and understanding wife in the world. Jesse has shown me a great deal of respect and patience throughout this entire ordeal. I can only pray that I treat her as well as she did me in the future. Thank you, babe.
Posted by Josh at 12:43:00 PM 5 comments

Josh & Jess hang out* with Mates of State

BUT we did go see them sunday night at The End (which is the biggest dive i've ever been to second to knoxville's The Pilot Light.) and just in case you haven't read my wife's blog about it yet (which she wrote that night after the concert at 1:30am!) i thought i should put up some pictures too. they really were a lot of fun to see. lots of energy and... fun. i mean, their music is fun, but the CDs don't do them any justice. and loud! good grief. we were right beside the drums so that didn't help, but my ears were still ringing yesterday afternoon. (i think they're fine now). i think best part of the evening was (besides getting to see this somewhat rare performance in our neck of the woods) getting to see jesse that excited about something. i could tell she was just tickled pink by the whole thing and i just really enjoy seeing that. 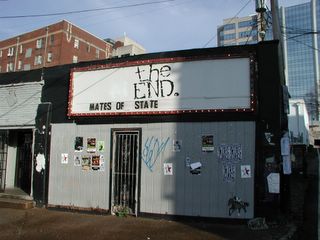 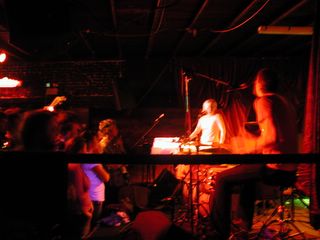 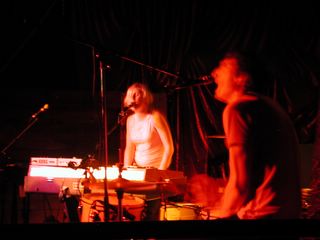 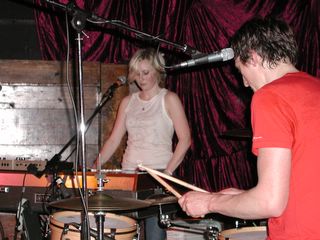 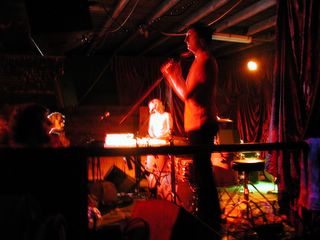 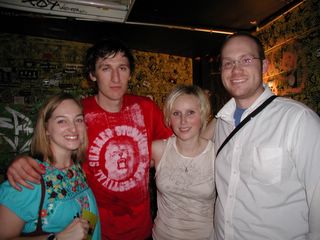 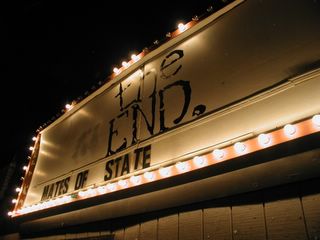 some guy stole their drumsticks after the show. that really made me mad. i just... the more i thought about it the more upset i got about it. and i just sat there and watched him do it like i didn't even realize what he was doing. what an ass. this just in: don't steal stuff from people. idiot.
Posted by Josh at 6:53:00 AM 6 comments