this is actually really good. it's also short and enjoyable (and i must say, quite accurate). so you should take this test and find out your true humor standings. (plus some of the test questions are hilarious)


You like things edgy, subtle, and smart. I guess that means you're probably an intellectual, but don't take that to mean you're pretentious. You realize 'dumb' can be witty--after all isn't that the Simpsons' philosophy?--but rudeness for its own sake, 'gross-out' humor and most other things found in a fraternity leave you totally flat.

I guess you just have a more cerebral approach than most. You have the perfect mindset for a joke writer or staff writer. Your sense of humor takes the most effort to appreciate, but it's also the best, in my opinion.

Also, you probably loved the Office.


oh. jess and i (and billy) went and saw March of the Penguins last night. it was tremendous. seriously, just an wonderful film (and incredible story) to watch.
Posted by Josh at 3:10:00 PM 0 comments

british humor. what will they come up with next?

of all the subjects they could have done a website on in response to the recent activities, i feel that they probably chose the most courageous.
Posted by Josh at 1:45:00 PM 0 comments

so jesse and i watched The Machinist the other day. it was pretty creepy. i cant believe Chrisian Bale lost that much weight. i think he actually weighed 120lbs in the movie. as you can see, he looks pretty terrible... 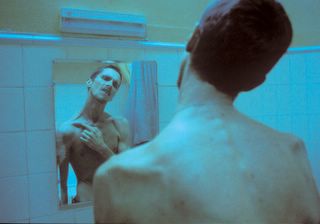 we've watched a couple of movies recently. Lemony Snicket's was pretty good. it was a bit sad (and a bit disturbing at times). sort of an unusual child's movie.

that Wikipedia (not sure where the name comes from) is a pretty awesome resource. it's got a better movie description page than IMDb. and you can look up random things apparently. The Big Lebowski has it 281 times (although it says at the bottom that it and variants of it occurred 398 times)! incredible! what a marvelous resource!

speaking of resources, i've just gone through a paradigm shift this morning (in like 5 min! pretty impressive, eh?) i'll no longer use Mapquest.com or any other subpar direction finding source. from now on it's Google Maps for me. it's so much better than the rest. and i think it's been around for a while. not sure why it took me so long. it's biggest pro is that it's got a far better and much more interactive map than mapquest (i've always hated mapquest's maps). it's a lot faster to use too. so... i highly recommend the Google Maps.

look how far i have to drive to work! 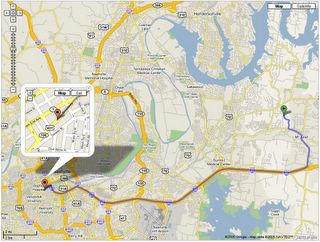 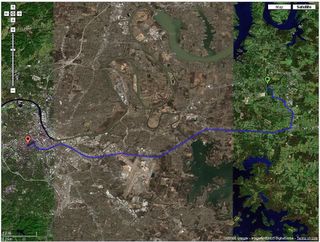 should we be concerned with Google's ginormous expansion into everything?
Posted by Josh at 7:39:00 AM 2 comments

okay first off, if you havent listened to music by Clap Your Hands Say Yeah

you really have to. i just got their cd the other day and it's just great music. do it.

second, this is just really impressive. it's a keyboard were every key has it's own independent display. it's wicked awesome.

third, jess and i drove to atlanta this weekend to attend/videotape bryan and oksana's off the wall wedding (just kidding it was great). seriously though it was very interesting. and rather pretty. i taped it. for 55 min. with no tripod. sheesh. after about 30 min into it i engaged one of my film techniques i refer to as "shaky-cam". the name pretty much says it all. anywho, it was a fun trip.

Google Earth is truly one of the most remarkable programs i've ever seen (and it's FREE). it's really unbelievable. the ease and indepthness of it is just incredible. it provides satellite images of anywhere on earth. with that you can display places to eat/sleep, street name, county/state/country lines, actual 3D topography, driving direction to anywhere, and more (i've just started looking at it). if you have a decently fast computer (and fast internet) i HIGHLY recommend trying out the free version. you wont regret it. 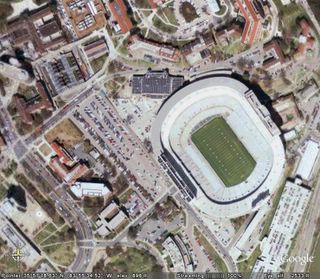 (you can actually zoom in a little more)

...now you're speakin my language!

man. me and billy and jordan and hg had a sweet time blowing up tons of stuff with fireworks the other day. they had those mortar shell ones that blast up out of tube and then blow up in the sky for so cheap. i bought $67 worth of stuff (=$112 normally).

anyway, we pretty much put those mortars everywhere we could to see how powerful they were. my conclusion: they are plenty powerful. it's safe to say it would blow your hand off if it detonated there. luckily each one has about 1.5ft fuse on it. man, but we put em everywhere: buried them in dirt, put them in a cardboard tube (to blow up the tube), shot them into trees, shot them from a handheld tube, and last but not least, detonated them underwater in a bucket. this was the icing on the cake. truly. i rubberbanded it to a dirt clod (so it would sink), lit the fuse and let it drop. the initial blast off made the bucket jump straight up at least a foot in the air. then the actual explosion shot water and flares everywhere within a 30ft radius. the first one cracked the bucket and blew the handle off it. fortunately, billy was there to "film" the whole thing on his phone. it's a bit dark and hard to tell whats going on, but when the video starts you're looking at the bucket from about 30-40ft away. (you probably will have to watch it a couple to times to fully appreciate it.

you probably have never heard of either of these bands but they have some really great music.

1. Clap Your Hands Say Yeah
- In This Home On Ice
- Upon This Tidal Wave of Young Blood

i havent heard a ton of Zykos' music, but that one song is tremendous.


seriously, amazing music. if you try it and disagree, feel free to let me know, so i'll know who to mock first for a complete lack of musical taste.
Posted by Josh at 2:09:00 PM 0 comments 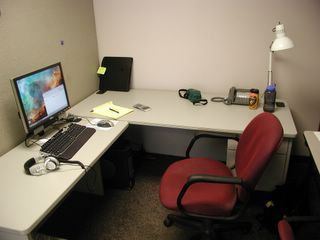 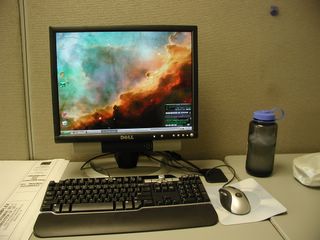